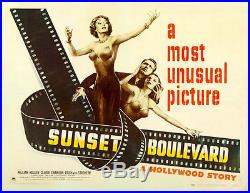 Sunset Boulevard, (Paramount, 1950). Original Vintage Movie Poster Half Sheet (22×28). Starring Gloria Swanson & William Holden. A first for Conway’s Vintage Treasures… Very rare and significant piece of Hollywood history. Highly scarce Original half sheet for this iconic classic. This poster has only appeared on the market a couple times in the past 20 years. Excellent condition and has been professionally linen backed. See enlargeable image above Don’t think about it too long as you’re not likely to ever see this opportunity again! Sunset Boulevard (Paramount, 1950). Half Sheet (22″ X 28″) Style A. Gloria Swanson showed true professionalism when she took on the role of aging actress Norma Desmond in this sensational and dark look at Hollywood. Billy Wilder directed this nightmarish movie that became a classic. Erich von Stroheim and William Holden (as Joe Gillis) co-star, but it was Swanson’s show and comeback vehicle. Swanson is in top diva form as Desmond on this half sheet, letting the world know she’s still a force with which to be reckoned! This style A half sheet is particularly rare and has appeared on hte market twice before, making this an incredibly rare chance to own a highly significant poster in the hobby. Restoration was applied to the folds, a chip in the top right corner and bottom border and pinholes in the corners. Fine/Very Fine on Linen. The item “SUNSET BOULEVARD ORIGINAL VINTAGE MOVIE POSTER HALF SHEET HOLDEN” is in sale since Thursday, June 22, 2017. This item is in the category “Entertainment Memorabilia\Movie Memorabilia\Posters\Originals-United States\1950-59″. The seller is “cvtreasures1″ and is located in Saint Augustine, Florida. This item can be shipped to North, South, or Latin America, all countries in Europe, Australia, Japan, South Korea, Indonesia, South africa, Thailand, Hong Kong, Israel, New Zealand, Singapore, Saudi arabia, United arab emirates, Qatar, Bahrain, Malaysia, China.