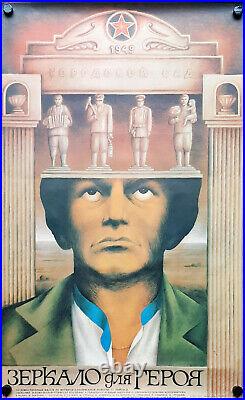 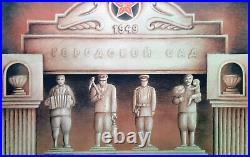 Original title on the poster. Literally English translated title. MIRROR FOR A HERO. IN: 25 x 41 – CM: 64.5 x 104.5. Original official Soviet unusual art poster for the film: “MIRROR FOR A HERO” Soviet feature film by Vladimir Khotinenko based on a script by Nadezhda Kozhushanaya, a fantastic parable based on the story of the same name by Svyatoslav Rybas. An important topic for the authors of the film – the insoluble conflict of times, fathers and children, received acute development, since it turned out to be impossible to change the past and fully live in it, but it is possible to understand and fall in love. While working on the script, Nadezhda Kozhushanaya (the writer) spent a lot of time in the archives, studying newspapers of the 1940s, using information, atmosphere. “Groundhog Day” – a film by Harold Ramis, released in 1993, repeats the main technique of “Mirror for a Hero” – the hero lives the same day many times. Two not quite similar men, our contemporaries, psychologist-linguist Sergey Pshenichny and former mining engineer Andrew Nemchinov, are walking in the street in their native miners town and found themselves in 1949. Its a common knowledge that real miracles happen without technical devices: time comes miracle happens. They spend in 1949 only one day the next morning they found that it is the same day that was yesterday. All several months, they spent in the past, they spent in one and the same day: the 8th of May, Sunday, the day of heightened coal production. In the morning to the coal mine, in an hour an accident in a coalface, at 10 o’clock wire from the Ministry, after work reunion concerning the Stalins anniversary; robbing of pay desk, death of policeman Ryabenko, in the evening – volunteer Sunday work… And in the morning the same, and so for ever and ever Philosophic fiction, accompanied by music of group Nautilus Pompillius. Sergey Koltakov, Ivan Bortnik, Boris Galkin. CHANTSEV ALEXANDER VASILIEVCIH (1949 – 2002) Alexander Chantsev was born in 1949 in the city of Torun, Poland. In 1973 he graduated from the Moscow Higher School of Industrial Art (formerly the Stroganov School) with a degree in Artistic Ceramics. The second prize of the International Olympic Poster Competition in 1980 gave impetus to the work in the poster genre. Several years of fruitful work in the circus poster followed, and during this period the individual style and technique of Alexander Chantsev gradually developed. In 1989 he was admitted to the Union of Artists. The film posters brought the artist international fame. Solo exhibitions of film posters by Alexander Chantsev took place in Rome in 1991 (together with Yuri Boxer) as part of the exhibition of Soviet film posters, which was held in the largest exhibition hall of the city – Palazzo delle Esposizioni. In 2001, an exhibition of movie posters by Chantsev, Boxer and Maistrovsky was held in the city of Tavira (Portugal). Alexander Chantsev took part in the largest exhibitions of Soviet and Russian posters, regularly participated in international biennials in Warsaw, Lahti, Colorado, Brno, took part in a poster exhibition in the Louvre (1989), the International Poster Festival in Chaumont, France (1991), in the exhibitions ” Russian social poster “in the USA (1991-92), Perestroika. Glasnost in Japan (1991-92), was awarded with diplomas of various competitions, a diploma of the finalist of the European competition of advertising EPICA in Paris (1992). Exhibitions of posters, in which Alexander Chantsev participated, have traveled almost all over the world, the originals and prints have ended up in the most famous galleries and in private collections in the USA, France, Switzerland, Belgium, and the Czech Republic. However, the rise of poster art, which took place thanks to perestroika and the resulting freedom, gradually ended, and interest in the poster was largely lost. New times have come when the emerging market relations have made completely different demands on artists. I had to master new genres – advertising booklets, annual reports, logos, corporate styles – and face a different customer. For the last seven years of his life, Alexander Chantsev was engaged in the design of exhibition stands, working as the art director of the Expoline company. It was a new business, and gradually the festive atmosphere of the exhibitions captured Alexander Chantsev entirely. Possessing tremendous efficiency and real professionalism, he managed to create many interesting exhibition stands for such companies as Lucent Technologies, Avaya, Alcatel, A&T Trade, KRKA, Shreya, Orimi Trade, Sunway, Mobile TeleSystems. Nevertheless, in Russia and the world, Alexander Chantsev is known primarily as a brilliant poster artist who belonged to a remarkable generation of artists. And the soft, good-natured humor of his circus posters, the philosophical metaphors of the movie posters, the sharp, satirical images of political posters will forever remain in our memory. From the unity of democratic anti-imperialist forces of the world, from their determination to fight for peace and security, for genuine democracy and socialism depends the future of the world. DIMITROV Dimitrov Georgi Mikhailov (1882 – 1949) is an activist of the Bulgarian and international communist movement. Dimitrov was called the “Bulgarian Lenin” and the leader of the Bulgarian people. After his death, he built a mausoleum in Sofia, like Lenin’s. In: 23×35 – cm: 57×87. This item is in the category “Art\Art Posters”. The seller is “soviet.posters” and is located in this country: UA. This item can be shipped worldwide.