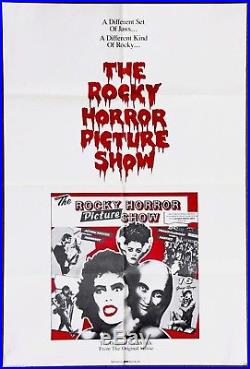 The Rocky Horror Picture Show Authentic Original Soundtrack Promotional Item 1980 for the 1975 film version of The Rocky Horror Picture Show used as paste up ads by Gem records in NYC Measures 20 ” x 30″ Near Mint to Mint Condition with folds (C9 -C10) We grade our items according to the Iguide Universal 10-Point Grading Scale: C10 Mint – Investment quality. No perceptible flaws of any kind. C9 Near Mint – Investment quality. Minor flaw on an otherwise unused item. C8 Excellent – Investment quality. A few minor defects. Pin holes, small tears, etc. C7 Very Good to Excellent – Fine. Still a very nicely preserved item. C6 Very Good – The typical used item in average condition. Several defects C5 Good to Very Good – A heavily-worn item. C4 Good – Below average but still suitable for display. C3 Fair – Heavily worn, but yet still complete. C2 Poor to Fair – An extremely worn, possibly even incomplete item. C1 Poor – The lowest grade, representing items in the lowest possible condition. Kept Flat, in a Smoke, Dust, and UV Light Free in sealed storage for over 40 years that has allowed the Colors to retain their Brilliancy without fading. This is the Original Promo Item and is not a Photo Copy, Re-print or Giclee , it is the Original Protomotional Soundtract Movie Item These are very rare collectible works. Double tubing would cost extra, but we provide it free for our customers. Customer comments have shown they truly appreciate this free extra care. The Rocky Horror Picture Show is a 1975 British-American musical comedy horror film based on The Rocky Horror Show, a musical stage play, book, music and lyrics by Richard O’Brien. Directed by Jim Sharman from a screenplay by Sharman and O’Brien, the production is a humorous tribute to the science fiction and horror B movies of the late 1940s through early 1970s. It introduces Tim Curry and features Susan Sarandon and Barry Bostwick along with cast members from the original Kings Road production presented at the Royal Court Theatre, London, in 1973. Still in limited release nearly 38 years after its premiere, it has the longest-running theatrical release in film history. It gained notoriety as a midnight movie in 1977 when audiences began participating with the film in theatres. Rocky Horror is the first film from a major Hollywood studio to be in the midnight movie market. The motion picture has a large international cult following and is one of the most well-known and financially successful midnight movies of all time. In 2005, the film was selected for preservation in the United States National Film Registry by the Library of Congress as being “culturally, historically, or aesthetically significant”. When You receive your item, There will be an inner tube inside the outer tube. Please unwrap the Outer wrapping on the Inner tube. The Item is rolled onto the inner tube NOT inside the inner tube. The item “The Rocky Horror Picture Show Very Rare Vintage Original ST Promotional Poster” is in sale since Sunday, May 11, 2014. This item is in the category “Entertainment Memorabilia\Movie Memorabilia\Posters\Originals-United States\1970-79″. The seller is “rarepics914″ and is located in Pelham, New York. This item can be shipped worldwide.