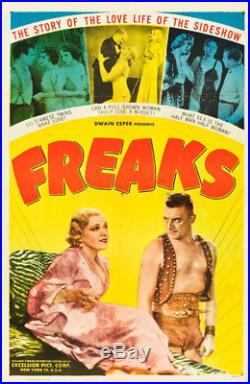 Tod Browning’s “Freaks”, 1932. Original Vintage One Sheet MoviePoster (27×41). A rare (only 2nd we have acquired in 25 years) original vintage one sheet from the controversial, cult classic 1932 Tod Browning classic “Freaks”. An amazing 1949 re-release one sheet with terrific artwork and graphics. The poster is in very good-excellent condition. It had some minor age related smudging on borders. However, this poster has been professionally linen backed and now looks amazing. The colors are exceptionally bright and vivid, especially since most of the ones we have seen have some fading to colors. And the age related toning and minor wear actually has an authentic beauty to it.. An absolute genuine , true piece of Hollywood history and the highlight for any collection.. Don’t let this one get away! The original 1932 one sheet for this film has (as far as we know in over 30 years collecting) never appeared on the market. One Sheet (27″ X 41″). Starring Wallace Ford, Leila Hyams, Olga Baclanova. Directed by Tod Browning. BIO: Freaks is a 1932 American horror film about sideshow performers, directed and produced by Tod Browning and released by Metro-Goldwyn-Mayer, with a cast mostly composed of actual carnival performers. The film was based on Tod Robbins’ short story “Spurs”. Director Browning took the exceptional step of casting real people with deformities as the eponymous sideshow “freaks, ” rather than using costumes and makeup. Browning had been a member of a traveling circus in his early years, and much of the film was drawn from his personal experiences. In the film, the physically deformed “freaks” are inherently trusting and honorable people, while the real monsters are two of the “normal” members of the circus who conspire to murder one of the performers to obtain his large inheritance Reaction: Journeyman screenwriter F. Scott Fitzgerald was nursing a hangover in the studio commissary and looked up from his meal to behold the Siamese twin sisters walking in to order lunch. What shall we have today? One asked the other. Fitzgerald ran to the bathroom and vomited. Despite the extensive cuts, the film was still negatively received by audiences, and remained an object of extreme controversy. Today, the parts that were removed from it are considered lost. Browning, famed at the time for his collaborations with Lon Chaney and for directing Bela Lugosi in Dracula (1931) had trouble finding work afterward, and this in effect brought his career to an early close. Because its deformed cast was shocking to moviegoers of the time, the film was banned in the United Kingdom for 30 years. Beginning in the early 1960s, Freaks was rediscovered as a counterculture cult film; throughout the 1970s and 1980s, the film was regularly shown at midnight movie screenings at several movie theaters in the United States. In 1994, Freaks was selected for preservation in the United States National Film Registry as being “culturally, historically, or aesthetically significant”. It was ranked 15th on Bravo TV’s list of the 100 Scariest Movie Moments. Among the characters featured as “freaks” were Peter Robinson (“the human skeleton”); Olga Roderick (“the bearded lady”); Frances O’Connor and Martha Morris (“armless wonders”); and the conjoined twins Daisy and Violet Hilton. Among the microcephalics who appear in the film (and are referred to as “pinheads”) were Zip and Pip (Elvira and Jenny Lee Snow) and Schlitzie, a male named Simon Metz who wore a dress mainly due to incontinence, a disputed claim. Also featured were the intersexual Josephine Joseph, with her left/right divided gender; Johnny Eck, the legless man; the completely limbless Prince Randian (also known as The Human Torso, and mis-credited as “Rardion”); Elizabeth Green the Stork Woman; and Koo-Koo the Bird Girl, who suffered from Virchow-Seckel syndrome or bird-headed dwarfism, and is most remembered for the scene where she dances on the table. Cult reaction: Owing to its cult status in the late-20th century, Freaks has been referenced explicitly in popular culture expressions from 1970s onward, from songs by other self-proclaimed “freaks”, such as the Ramones “Pinhead” Gabba, gabba, we accept you, one of us. “, Marillion (“Freaks”, “Separated Out”) and David Bowie (“Diamond Dogs”), to “cult” comic strips like Zippy the Pinhead (a reference to the aforementioned microcephalic), and episodes of many TV series, including South Park, Clerks: The Animated Series, Futurama (“Bendin’ in the Wind) and The Big Bang Theory. The chant of One of us! Is commonly used as a reference to the film. Clips from the movie were included in the entrance video of former World Wrestling Federation faction Oddities. The item “Freaks Vintage Horror One Sheet movie poster 1932″ is in sale since Monday, June 11, 2018. This item is in the category “Entertainment Memorabilia\Movie Memorabilia\Posters\Originals-United States\Pre-1940″. The seller is “cvtreasures1″ and is located in Saint Augustine, Florida. This item can be shipped to United States, United Kingdom, Denmark, Romania, Slovakia, Bulgaria, Czech republic, Finland, Hungary, Latvia, Lithuania, Malta, Estonia, Australia, Greece, Portugal, Cyprus, Slovenia, Japan, China, Sweden, South Korea, Indonesia, South africa, Thailand, Belgium, France, Hong Kong, Ireland, Netherlands, Poland, Spain, Italy, Germany, Austria, Israel, Mexico, New Zealand, Singapore, Switzerland, Norway, Saudi arabia, United arab emirates, Qatar, Kuwait, Bahrain, Croatia, Malaysia, Brazil, Colombia, Panama, Jamaica, Bahamas, Viet nam, Canada.