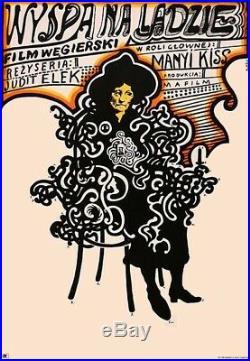 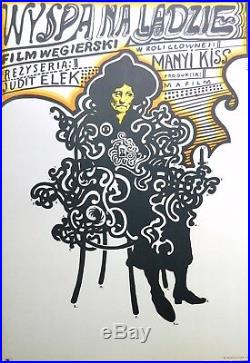 This poster was designed by Franciszek Starowieyski in 1969. It is for the Hungarian film “The Lady from Constantinople ” directed by Judit Elek. The poster measures 23″ x 33″. For a little while her everyday life is changed. She meets and entertains new people every day. This is a Vintage Original Poster from my personal Starowieyski Collection that I acquired from K. Dydo at his Galeria Plakatu in Krakow Poland during an academic trip in 1986. It is in very good condition, has been store in a flat file, and has never been exhibited or framed. (born July 8, 1930 in Bratkowka, Poland, died February 23, 2009), was an awarding winning artist. From 1949 to 1955 he studied at Academy of Fine Arts in Krakow and Warsaw. He studied drawing, painting, stage designing, and book illustration. His posters specialized in imaginative, often surreal and beautifully grotesque images. He was a member of. Was the first Polish artist to have a one man show at the Museum of Modern Art (MoMa) in New York City in 1986. 1973 – Award, International Biennale of the Arts, São Paulo (Brazil). 1974 – Film poster award, Cannes Film Festival, Cannes (France). 1974 – 2nd Prize, International Biennial of Posters, Warsaw (Poland). 1978 – 2nd Prize, International Biennial of Posters, Warsaw (Poland). 1979 – Gold Plaque, International Film Festival, Chicago (USA). 1982 – Silver Hugo, Film poster competition. 2000 – 3rd Prize, International Biennial of Posters, Warsaw (Poland). The item “Original Vintage Polish Poster/ Franciszek StarowieyskiISLAND ON THE CONTINENT” is in sale since Sunday, February 18, 2018. This item is in the category “Art\Art Posters”. The seller is “artistvoodoo” and is located in Willimantic, Connecticut. This item can be shipped to United States, Canada, Mexico, Bermuda.