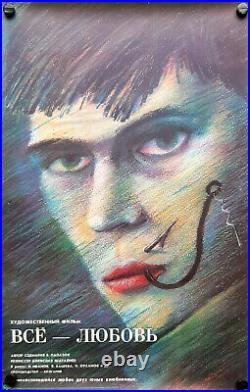 Original Russian title on the poster. IN: 22 x 34 = CM: 55 x 85. ROLLED, NEAR TO GOOD. Original vintage Soviet movie poster for the drama film. (Original title on Bulgarian) – Premiere 10 December 1979 in Bulgaria. A boy from a poor Sofia neighborhood – Rado who is orphan and has committed several petty crimes – is sent to a borstal, or, to put it otherwise becomes a juvenile prisoner. Unfortunately, however, he cannot reconcile his uncomplicated pride, sense of justice with the kind of education provided by people who are more often than not deprived of sensibility and human warmth. The order there is repulsive, the boy is seeking for freedom and often makes escapes. During one of the escapes he meets the love of his lifetime. Suddenly Rado falls in love with Benny, a student, the daughter of well educated and sophisticated family (at least, this is the first impression) and this intensify his desire for freedom and independence. Naturally, conflict is not slow to appear. The parents of Benny are panic-stricken when getting aware of the fact. They are resolved to separate the couple. Their parental love is sincere but the reality is phony and cruel. The boy’s hopes are thwarted for good and.. Ivan Ivanov, Yanina Kasheva, Valcho Kamarashev. Borislav Angelov Sharaliev (1922 – 2002) Bulgarian film director and screenwriter. People’s Artist of the NRB. Since 1943 he has performed on the stage. Since 1954 he has been on the staff of the Feature Film Studio. Directorial debut – “Song of a Man” (1954). The author of films of different genres: musical comedies, descriptions of everyday life by filmmakers, youth issues, historical narratives. Original title on the poster. I’m a paragraph. Mention details and specifications that you believe are relevant to your buyers. CHANTSEV ALEXANDER VASILIEVCIH (1949 – 2002). Alexander Chantsev was born in 1949 in the city of Torun, Poland. In 1973 he graduated from the Moscow Higher School of Industrial Art (formerly the Stroganov School) with a degree in Artistic Ceramics. The second prize of the International Olympic Poster Competition in 1980 gave impetus to the work in the poster genre. Several years of fruitful work in the circus poster followed, and during this period the individual style and technique of Alexander Chantsev gradually developed. In 1989 he was admitted to the Union of Artists. The film posters brought the artist international fame. Solo exhibitions of film posters by Alexander Chantsev took place in Rome in 1991 (together with Yuri Boxer) as part of the exhibition of Soviet film posters, which was held in the largest exhibition hall of the city – Palazzo delle Esposizioni. In 2001, an exhibition of movie posters by Chantsev, Boxer and Maistrovsky was held in the city of Tavira (Portugal). Alexander Chantsev took part in the largest exhibitions of Soviet and Russian posters, regularly participated in international biennials in Warsaw, Lahti, Colorado, Brno, took part in a poster exhibition in the Louvre (1989), the International Poster Festival in Chaumont, France (1991), in the exhibitions ” Russian social poster “in the USA (1991-92), Perestroika. Glasnost in Japan (1991-92), was awarded with diplomas of various competitions, a diploma of the finalist of the European competition of advertising EPICA in Paris (1992). Exhibitions of posters, in which Alexander Chantsev participated, have traveled almost all over the world, the originals and prints have ended up in the most famous galleries and in private collections in the USA, France, Switzerland, Belgium, and the Czech Republic. However, the rise of poster art, which took place thanks to perestroika and the resulting freedom, gradually ended, and interest in the poster was largely lost. New times have come when the emerging market relations have made completely different demands on artists. I had to master new genres – advertising booklets, annual reports, logos, corporate styles – and face a different customer. For the last seven years of his life, Alexander Chantsev was engaged in the design of exhibition stands, working as the art director of the Expoline company. It was a new business, and gradually the festive atmosphere of the exhibitions captured Alexander Chantsev entirely. Possessing tremendous efficiency and real professionalism, he managed to create many interesting exhibition stands for such companies as Lucent Technologies, Avaya, Alcatel, A&T Trade, KRKA, Shreya, Orimi Trade, Sunway, Mobile TeleSystems. Nevertheless, in Russia and the world, Alexander Chantsev is known primarily as a brilliant poster artist who belonged to a remarkable generation of artists. And the soft, good-natured humor of his circus posters, the philosophical metaphors of the movie posters, the sharp, satirical images of political posters will forever remain in our memory. YALTA HOTEL YALTA INTOURIST WELCOMES YOU! Come to us in the USSR! – the meaning of the posters issued by the firm “Intourist” was advertising of tourist trips for foreign citizens beyond the “Iron Curtain”. Yalta Hotel – is still working nowadays under the same name. In: 16×26 – cm: 40×60. This item is in the category “Art\Art Posters”. The seller is “soviet.posters” and is located in this country: UA. This item can be shipped worldwide.