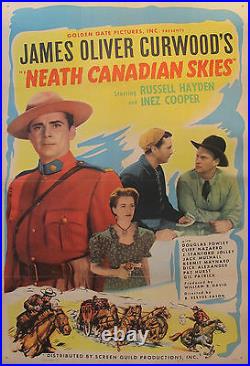 Date: 1946 Size: 41 x 27 inches Notes: Poster, Linen-Backed Artist: Anonymous. A poster for the 1946 film entitled’Neath Canadian Skies, directed by B. Reeves Eason and starring Russel Hayden, Inez Cooper and Douglas Fowley. The movie was a 45-minute “Northern” produced by Golden Gate in which Russel Hayden played a mountie posing as a criminal in order to solve a murder. According to Media Historian Hal Erickson,’Neath Canadian Skies was allegedly based on a story by James Oliver Curwood, the film ends rather abruptly; a second off-length film, North of the Border, ties up some of the loose plot ends of Neath The Canadian Skies, suggesting that these two short films were. Originally one long one. Confirming this suspicion is the fact that the supporting casts of both films Inez Cooper, Douglas Fowley, I. A second pair of 45-minuters starring Russell Hayden, Where the North Begins and Trail of the Mounties, showed. The poster is linen-backed and in good condition. PLEASE LET US KNOW IF THERE IS ANYTHING IN PARTICULAR YOU ARE LOOKING FOR -WITH OVER 3000 ITEMS IN STOCK, WE MIGHT JUST HAVE IT! Please note that all of our pochoirs, prints and posters are vintage, non-reproduction, original pieces. This item is in the category “Art\Art Posters”. The seller is “vintagepostersforyou” and is located in this country: CA. This item can be shipped worldwide.