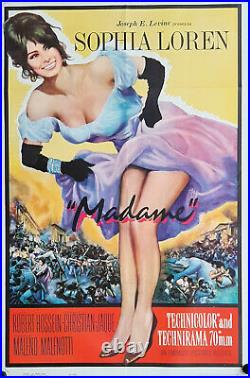 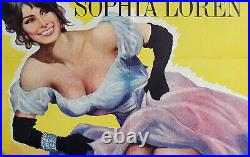 Original released film title on the poster. Released title for English speaking countries. NATIONAL SCREEN SERVICE CORP. IN: 27 x 41= CM: 69 x 104. ROLLED, USED TO BE FOLDED. Is a 1961 Spanish-Italian-French film co-production, filmed in Eastmancolor and Technirama, and distributed in the U. The film was directed by Christian-Jaque and adapted from the 1893 play by Victorien Sardou and Émile Moreau. The picture has won the attention of viewers in different parts of the world. The poster has a very minor pinholes in the blank corners one has caused some paper loss at lower right (see image). It is otherwise in pretty nice condition. Catherine, an out-spoken Parisian laundress follows Napoleon’s army to the battlefront to be near her Sergeant Lefevre. The couple perform a deed of heroism which abets Napoleon’s victory, so that after the war the grateful Emperor bestows on the now married couple the title of Duke and Duchess. Catherine squabbles with Napoleon’s haughty sisters, scandalizes the nobility with her lack of courtly manners, flirts with the men – and consistently creates havoc as she remains true to her earthy background. Sophia Loren and several French and Italian stars including Robert Hossein, Julien Berto, Renault Mary, Lea Gray, Gianrico Tedeschi and Marina Berti. Original title on the poster. I’m a paragraph. Mention details and specifications that you believe are relevant to your buyers. CHANTSEV ALEXANDER VASILIEVCIH (1949 – 2002). Alexander Chantsev was born in 1949 in the city of Torun, Poland. In 1973 he graduated from the Moscow Higher School of Industrial Art (formerly the Stroganov School) with a degree in Artistic Ceramics. The second prize of the International Olympic Poster Competition in 1980 gave impetus to the work in the poster genre. Several years of fruitful work in the circus poster followed, and during this period the individual style and technique of Alexander Chantsev gradually developed. In 1989 he was admitted to the Union of Artists. The film posters brought the artist international fame. Solo exhibitions of film posters by Alexander Chantsev took place in Rome in 1991 (together with Yuri Boxer) as part of the exhibition of Soviet film posters, which was held in the largest exhibition hall of the city – Palazzo delle Esposizioni. In 2001, an exhibition of movie posters by Chantsev, Boxer and Maistrovsky was held in the city of Tavira (Portugal). Alexander Chantsev took part in the largest exhibitions of Soviet and Russian posters, regularly participated in international biennials in Warsaw, Lahti, Colorado, Brno, took part in a poster exhibition in the Louvre (1989), the International Poster Festival in Chaumont, France (1991), in the exhibitions ” Russian social poster “in the USA (1991-92), Perestroika. Glasnost in Japan (1991-92), was awarded with diplomas of various competitions, a diploma of the finalist of the European competition of advertising EPICA in Paris (1992). Exhibitions of posters, in which Alexander Chantsev participated, have traveled almost all over the world, the originals and prints have ended up in the most famous galleries and in private collections in the USA, France, Switzerland, Belgium, and the Czech Republic. However, the rise of poster art, which took place thanks to perestroika and the resulting freedom, gradually ended, and interest in the poster was largely lost. New times have come when the emerging market relations have made completely different demands on artists. I had to master new genres – advertising booklets, annual reports, logos, corporate styles – and face a different customer. For the last seven years of his life, Alexander Chantsev was engaged in the design of exhibition stands, working as the art director of the Expoline company. It was a new business, and gradually the festive atmosphere of the exhibitions captured Alexander Chantsev entirely. Possessing tremendous efficiency and real professionalism, he managed to create many interesting exhibition stands for such companies as Lucent Technologies, Avaya, Alcatel, A&T Trade, KRKA, Shreya, Orimi Trade, Sunway, Mobile TeleSystems. Nevertheless, in Russia and the world, Alexander Chantsev is known primarily as a brilliant poster artist who belonged to a remarkable generation of artists. And the soft, good-natured humor of his circus posters, the philosophical metaphors of the movie posters, the sharp, satirical images of political posters will forever remain in our memory. YALTA HOTEL YALTA INTOURIST WELCOMES YOU! Come to us in the USSR! – the meaning of the posters issued by the firm “Intourist” was advertising of tourist trips for foreign citizens beyond the “Iron Curtain”. Yalta Hotel – is still working nowadays under the same name. In: 16×26 – cm: 40×60. This item is in the category “Art\Art Posters”. The seller is “soviet.posters” and is located in this country: US. This item can be shipped worldwide.