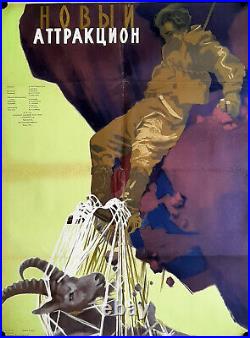 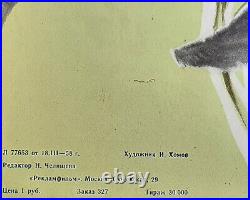 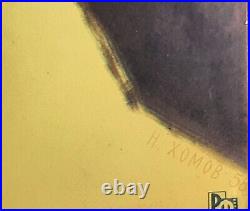 Original released film title on the poster. Released title for English speaking countries. A NEW NUMBER COMES TO MOSCOW. IN: 30 x 40 = CM: 74 x 100.5. ROLLED, USED TO BE FOLDED. Is a Soviet children’s color feature film of 1957, shot at the Mosnaukfilm studio. As a child, Vasya dreamed of becoming a trainer. The time has come – and the dream came true, the number with the bears brought Vasily recognition. But the “artist” escaped, and then the hero decided to create a new attraction, placing in one cage of eternal enemies: Capricorn and snow leopard. Ivana Rubana, Vladimir Balashov, Inna Kmit. KHOMOV NIKOLAY MIKHAYLOVICH (1903 – 1973) Famous artist, an outstanding master of poster, Honored Artist of the RSFSR, created over 500 film posters from 1926 to 1973. The father of the film poster artist Daniil Khomov. 1903 Born in the Polish city of Chelm in the Krylov settlement the settlement is part of the city behind the fortress wall, there lived artisans, burghers, Jews (the oldest Jewish community in Poland) Chelm – 25 km from the border with Ukraine. Graduated from the Art and Industrial School in Mariupol. During the Civil War he was in the ranks of the Red Army. From 1926 he worked in film posters. 1928 Graduated from Vhutein in Moscow. He fought in the Great Patriotic War. As a reserve officer (quartermaster of the third rank – captain), he fought as a private because of the loss of documents at the military registration and enlistment office. He went from the south to the baltics and ended in Königsberg, and during the civil war he fought as a volunteer in the cavalry. He was awarded an order and medals, as well as thanks from the command. Not a single wound in two wars. Since 1964 Honored Artist of the RSFSR. 1973 Died in Moscow. Original title on the poster. I’m a paragraph. Mention details and specifications that you believe are relevant to your buyers. CHANTSEV ALEXANDER VASILIEVCIH (1949 – 2002). Alexander Chantsev was born in 1949 in the city of Torun, Poland. In 1973 he graduated from the Moscow Higher School of Industrial Art (formerly the Stroganov School) with a degree in Artistic Ceramics. The second prize of the International Olympic Poster Competition in 1980 gave impetus to the work in the poster genre. Several years of fruitful work in the circus poster followed, and during this period the individual style and technique of Alexander Chantsev gradually developed. In 1989 he was admitted to the Union of Artists. The film posters brought the artist international fame. Solo exhibitions of film posters by Alexander Chantsev took place in Rome in 1991 (together with Yuri Boxer) as part of the exhibition of Soviet film posters, which was held in the largest exhibition hall of the city – Palazzo delle Esposizioni. In 2001, an exhibition of movie posters by Chantsev, Boxer and Maistrovsky was held in the city of Tavira (Portugal). Alexander Chantsev took part in the largest exhibitions of Soviet and Russian posters, regularly participated in international biennials in Warsaw, Lahti, Colorado, Brno, took part in a poster exhibition in the Louvre (1989), the International Poster Festival in Chaumont, France (1991), in the exhibitions ” Russian social poster “in the USA (1991-92), Perestroika. Glasnost in Japan (1991-92), was awarded with diplomas of various competitions, a diploma of the finalist of the European competition of advertising EPICA in Paris (1992). Exhibitions of posters, in which Alexander Chantsev participated, have traveled almost all over the world, the originals and prints have ended up in the most famous galleries and in private collections in the USA, France, Switzerland, Belgium, and the Czech Republic. However, the rise of poster art, which took place thanks to perestroika and the resulting freedom, gradually ended, and interest in the poster was largely lost. New times have come when the emerging market relations have made completely different demands on artists. I had to master new genres – advertising booklets, annual reports, logos, corporate styles – and face a different customer. For the last seven years of his life, Alexander Chantsev was engaged in the design of exhibition stands, working as the art director of the Expoline company. It was a new business, and gradually the festive atmosphere of the exhibitions captured Alexander Chantsev entirely. Possessing tremendous efficiency and real professionalism, he managed to create many interesting exhibition stands for such companies as Lucent Technologies, Avaya, Alcatel, A&T Trade, KRKA, Shreya, Orimi Trade, Sunway, Mobile TeleSystems. Nevertheless, in Russia and the world, Alexander Chantsev is known primarily as a brilliant poster artist who belonged to a remarkable generation of artists. And the soft, good-natured humor of his circus posters, the philosophical metaphors of the movie posters, the sharp, satirical images of political posters will forever remain in our memory. YALTA HOTEL YALTA INTOURIST WELCOMES YOU! Come to us in the USSR! – the meaning of the posters issued by the firm “Intourist” was advertising of tourist trips for foreign citizens beyond the “Iron Curtain”. Yalta Hotel – is still working nowadays under the same name. In: 16×26 – cm: 40×60. This item is in the category “Art\Art Posters”. The seller is “soviet.posters” and is located in this country: US. This item can be shipped worldwide.