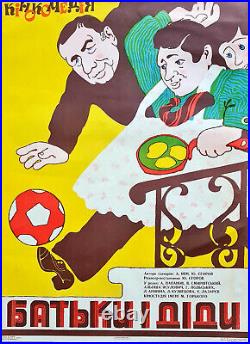 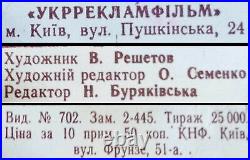 Original Ukrainian film title on the poster. Original Russian film title. Original (transliteration) film title. Informal literal (translation) English title. IN: 23 ¼ x 32 ¼ = CM: 59 x 82. Original vintage Soviet movie poster. (from the first release of the film in Soviet Union – September 21, 1982). ” Fathers and Grandfathers ” is a 1982 lyrical comedy directed by Yuri Yegorov. Filming took place in Smolensk. The film was watched by 22.1 million viewers. Lukov-grandfather (Anatoly Papanov), even if he has a little left until his retirement, is an energetic and cheerful person. But he has an adult son (Valentin Smirnitsky), a resolute and active daughter-in-law (Galina Polskikh), a growing grandson (Alexei Yasulovich), and they all persistently drive his grandfather into the position of a “grandfather”, an aging patriarch, whose job is to sit on the rubble and squint at Sun. The role of Lukov Sr. Prepared for him is decidedly not satisfied. He is going to show everyone: even if he has gray hair in his beard, the demon will surely hit the rib, and, accordingly, his personal life is just beginning. But when the topic of marriage was raised, Lukov, the son, with the active support of both his wife and son, Lukov, the grandson, said that it was too late for his grandfather to marry – after all, he is not a kamikaze. Then this handsome man in full bloom of strength, able to stop the bulldozer and jump from the balcony, decided to prove to others, and, above all, to himself that he still has something ahead of him and that he, if he wants, can do everything. This item is in the category “Art\Art Posters”. The seller is “soviet.posters” and is located in this country: US. This item can be shipped worldwide.